Redemption in the Ruts! Piggy's Revenge 2015 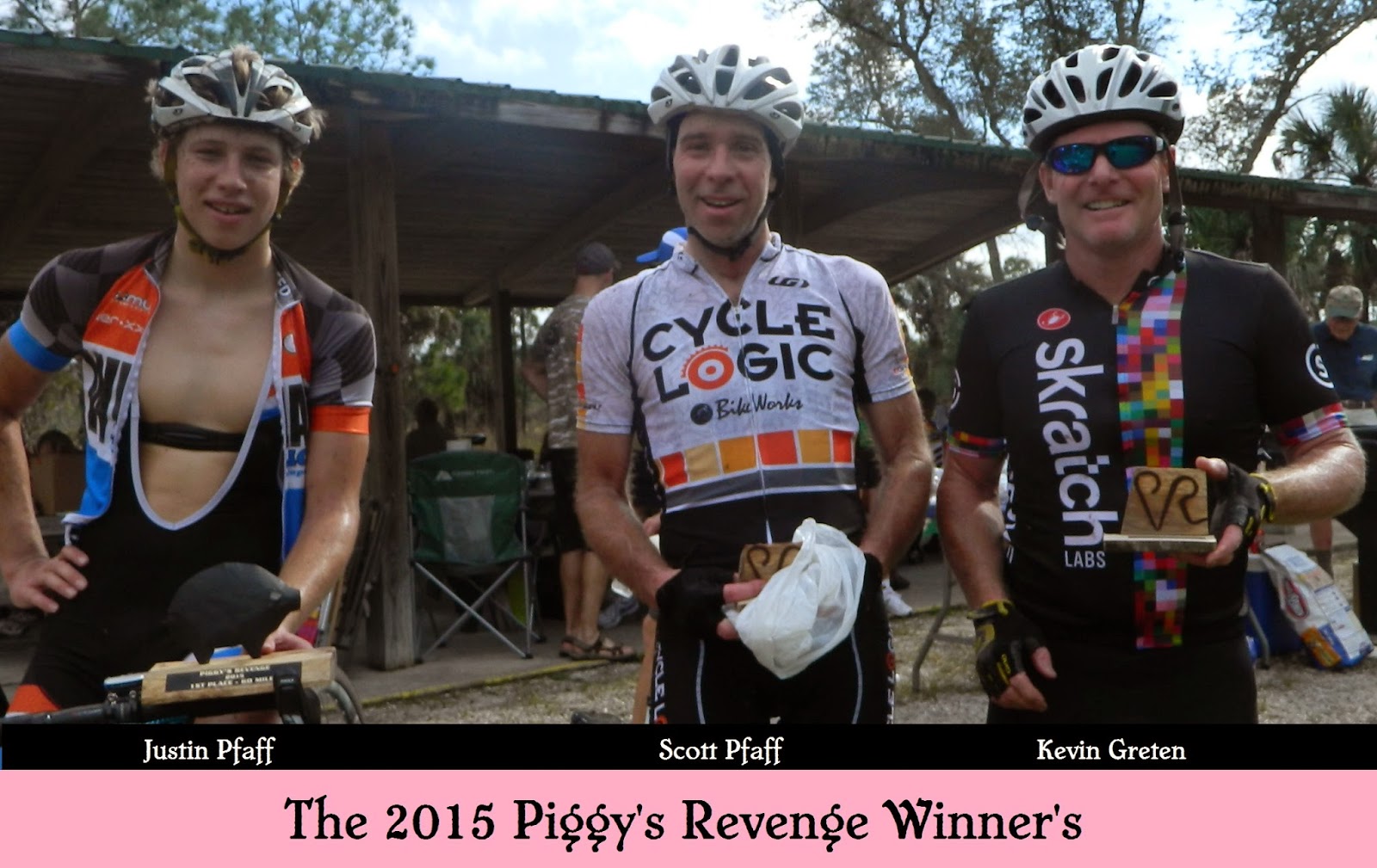 It was the biggest event ever put on by the boys at SCORR. The 4th annual Piggy's Revenge attracted 161 riders (87 Pre-reg, 74 day of), twice the amount of last year's race. Online promotions created an ongoing conversation about the types of trails, the routes and the best bikes for the job. In the end, people chose a little bit of everything. There were roughly 50 riders for each distance and they were straddling the whole shebang from cross bikes to full suspension rigs to fatties.

In addition to individual riders there was more than 30 teams representing. Plus we saw a handful of photographers, reporters from the Herald-Tribune and a drone copter flying high above the trees. In the spirit of riding the wild, some people took it upon themselves to dress up for the occasion. There was a wolf and three piggy's, a mermaid, a pumpkin and a slice of pizza. 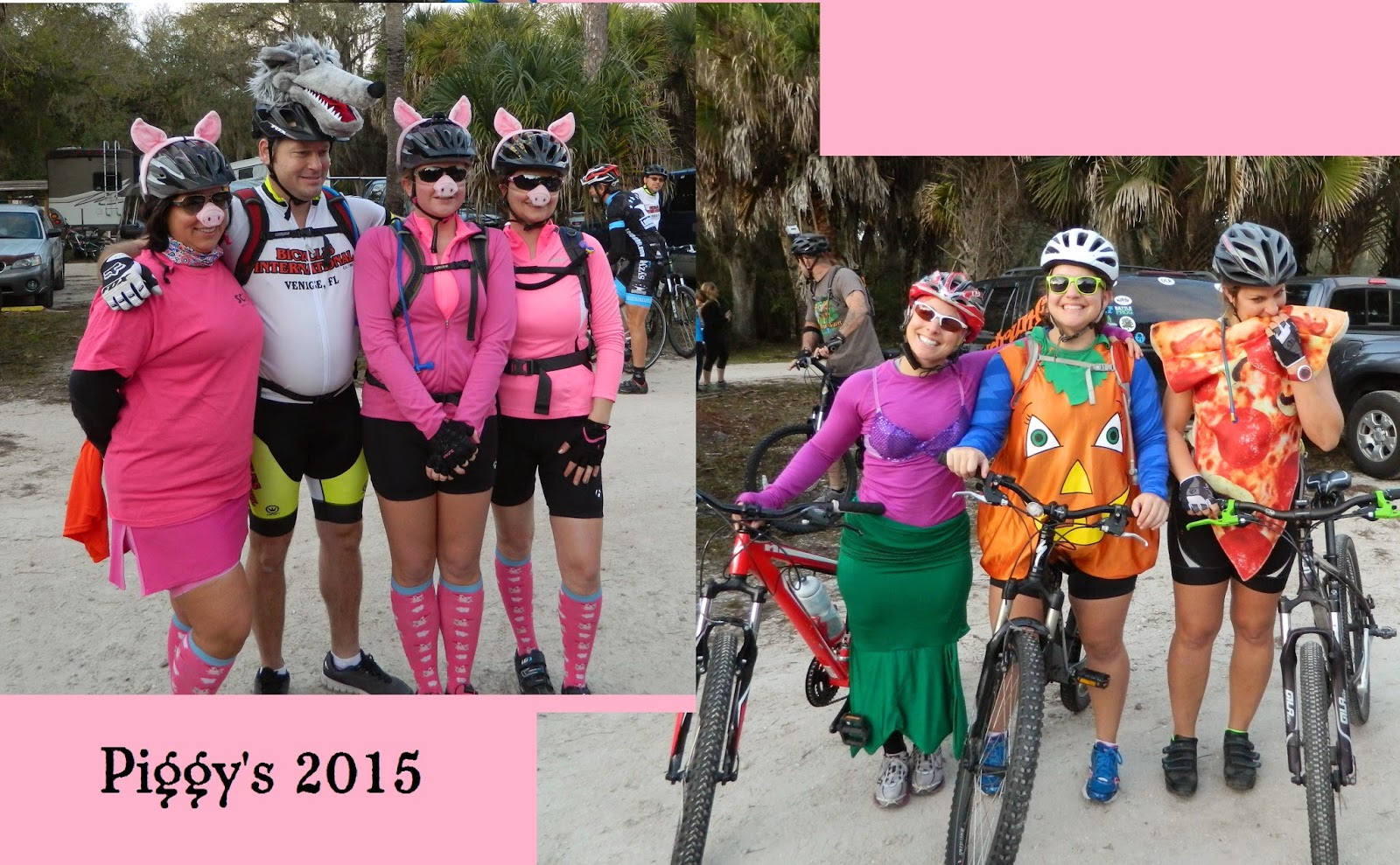 After all of the riders had signed in and received their t-shirts, SCORR President Eric Claessens stood up before the crowd to give everyone their last minute instructions.

While anyone can write a race report from the sidelines, I prefer to get my feet wet so I signed up for the 60 and dove into the thick of the action. We left the parking lot at 8:15am in a neutral procession lead by SCORR member Steve Christian. Upon reaching the right turn onto the Red trail, Steve moved aside and let the big race begin.

The pace quickened as the riders, many of them on cross bikes, blasted through the trail taking a right at the halfway point and heading towards the wild unknown. As the next turn closed in, we already had a problem. A large group of riders had passed me but they missed the turn and were going in the wrong direction. I followed them hoping they would slow as the GPS suddenly didn't match the terrain. They finally stopped when it hit them. I led that group as well as ten other stragglers to the gate that empties out onto Border road. I waited on the road until everyone had passed, instructing them to watch for the next gate on the left.

When I inquired as to why they were going the wrong way, for some their GPS was off by a few meters and that meant the difference between two trails that ran parallel. For others, they didn't have a GPS! Having signed up at the last minute they missed that little detail. 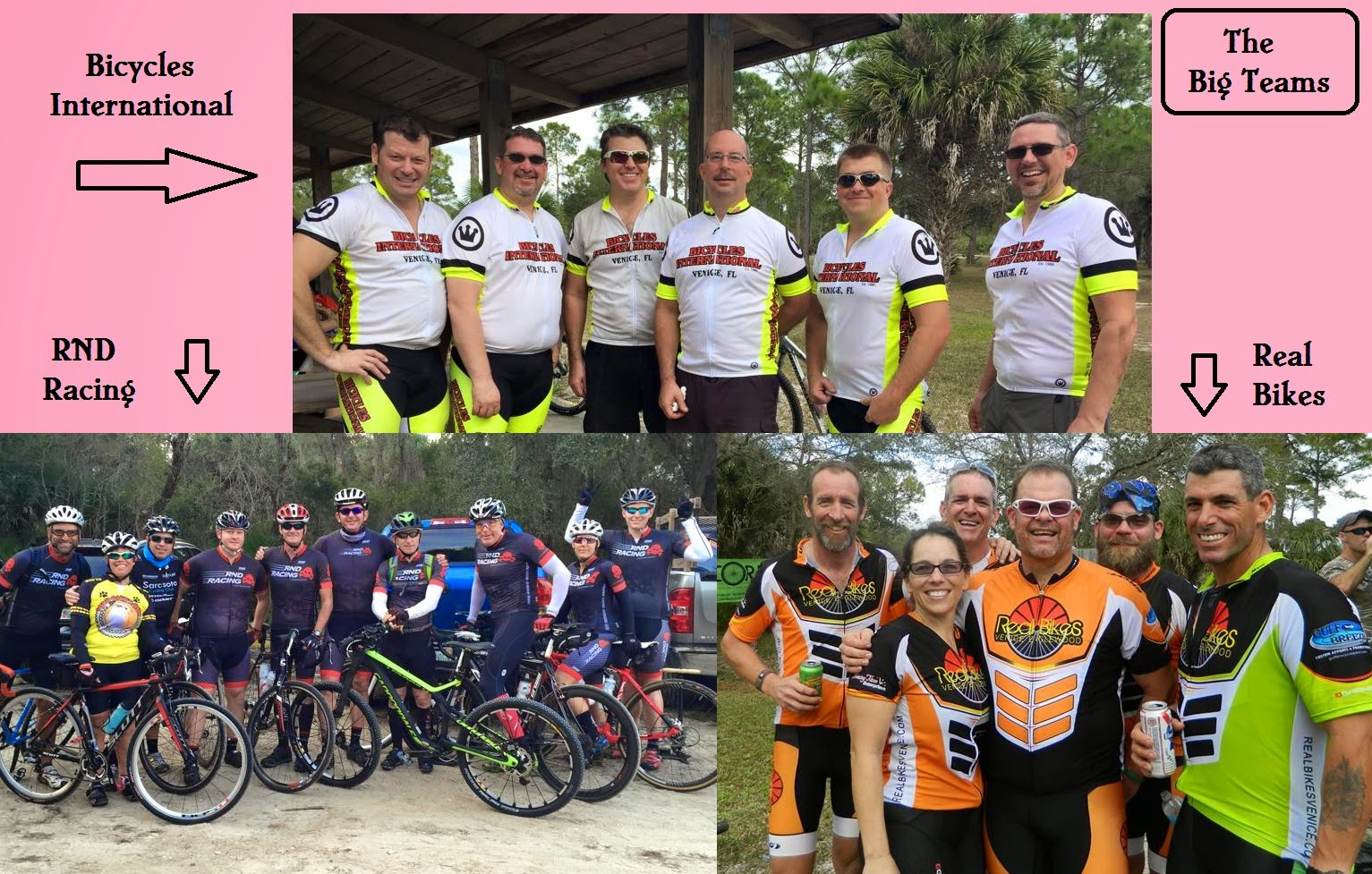 "I'm gonna stick with you." Theron Miller, a local mechanic representing Real Bikes hadn't brought a GPS but after discovering that I had memorized the route decided he was going to follow me for the duration. Moments later the drama continued. Still on Border road we came upon members of the RND race team from Sarasota. One of them had a pinch flat. They had the tools and know how to fix it so we wished them luck and continued on. After sloshing through some muck on Doe Hammock, Theron and I hit the south powerline with the intention of making up time. Another rider had stopped near the Venice-Arcadia Grade turn off. He also didn't have a GPS, "Follow us."

Later on the south powerlines we saw the lead group for the 40 mile race. It was a pack of five riders in team time trial formation, one of which wore the distinct orange colors of Team Real Bikes. This is one of those redemption stories. Eric Latimer, a mechanic for Real Bikes Venice, was a serious contender for the 60 mile race last year but he was beat out by Team Cycle Logic. This year he chose to take on the 40 route and did so with friends. Aided by Russell Peelman of Saint Petersburg (Who had to endure tire issues), Eric maintained a furious pace and eventually took the win. 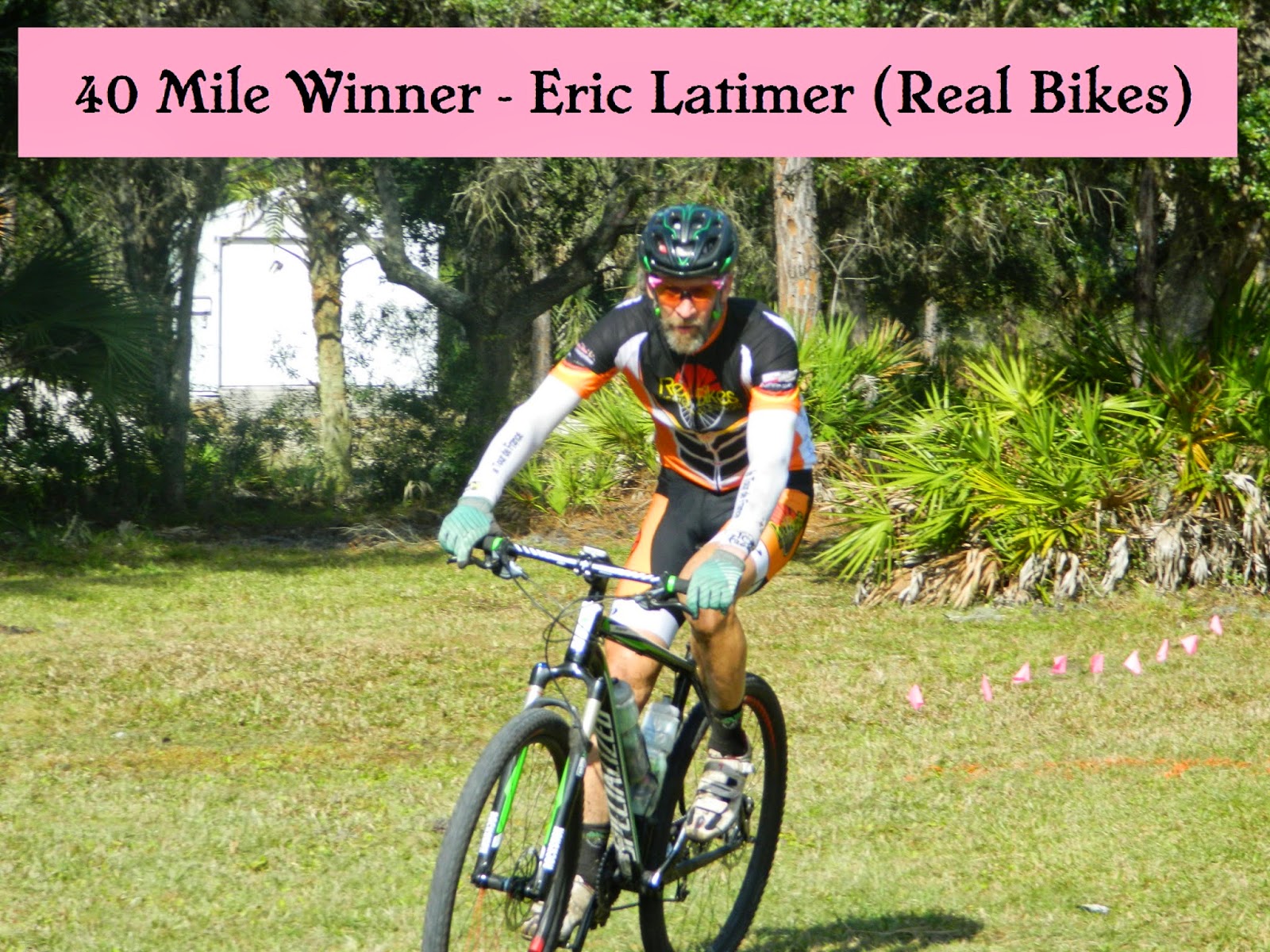 My trend of picking up stragglers continued until I had a small group of about 8 riders. Turning onto Stockade road I tried to keep up a solid pace, if only to appease the stronger riders who were following me. However, that pace caused us to shed a couple off the back. Bear Hammock trail was a mix of cruise and bounce where we saw 4 pigs inside the cage traps. We turned down Turpentine and fought through muddy ruts. This was where you wanted to have a mountain bike. Due to a mechanical, this was where we lost our cyclocross friends. Now we were back to three.

A quick jaunt down Wellfield road brought us to Tom's Oasis rest stop. A party to rival no other. There were riders from all three routes meeting together, eating, drinking and chatting on about what had happened so far. Between the cowbells, cameras, beer and the otter, you almost forgot that you were in the middle of a race. Tom and Jeff informed us that the "Fast" 60 mile riders didn't even stop, they whizzed by about an hour earlier.

With more than 30 competitors, the ladies were in full force at this year's race. While most took on the 20 mile challenge, a few made a play for the 40 mile title. Donna Davis (Connecticut), Sierra Stafford (Cape Coral) and others took on local rider Melody Vasbinder (Real Bikes Englewood) who turned on the afterburners and came away with the victory.

While at Tom's Oasis my group ran into Karen Franzen, another of our redemption stories. Karen traveled all the way down from Connecticut and took on the 60 mile challenge last year but she got lost on course. While she did receive the award last year, this time around she was determined to complete the task. Karen left the Oasis only 5 minutes before us but she must have been flying because we never saw her again. She finished the race and took the women's overall. 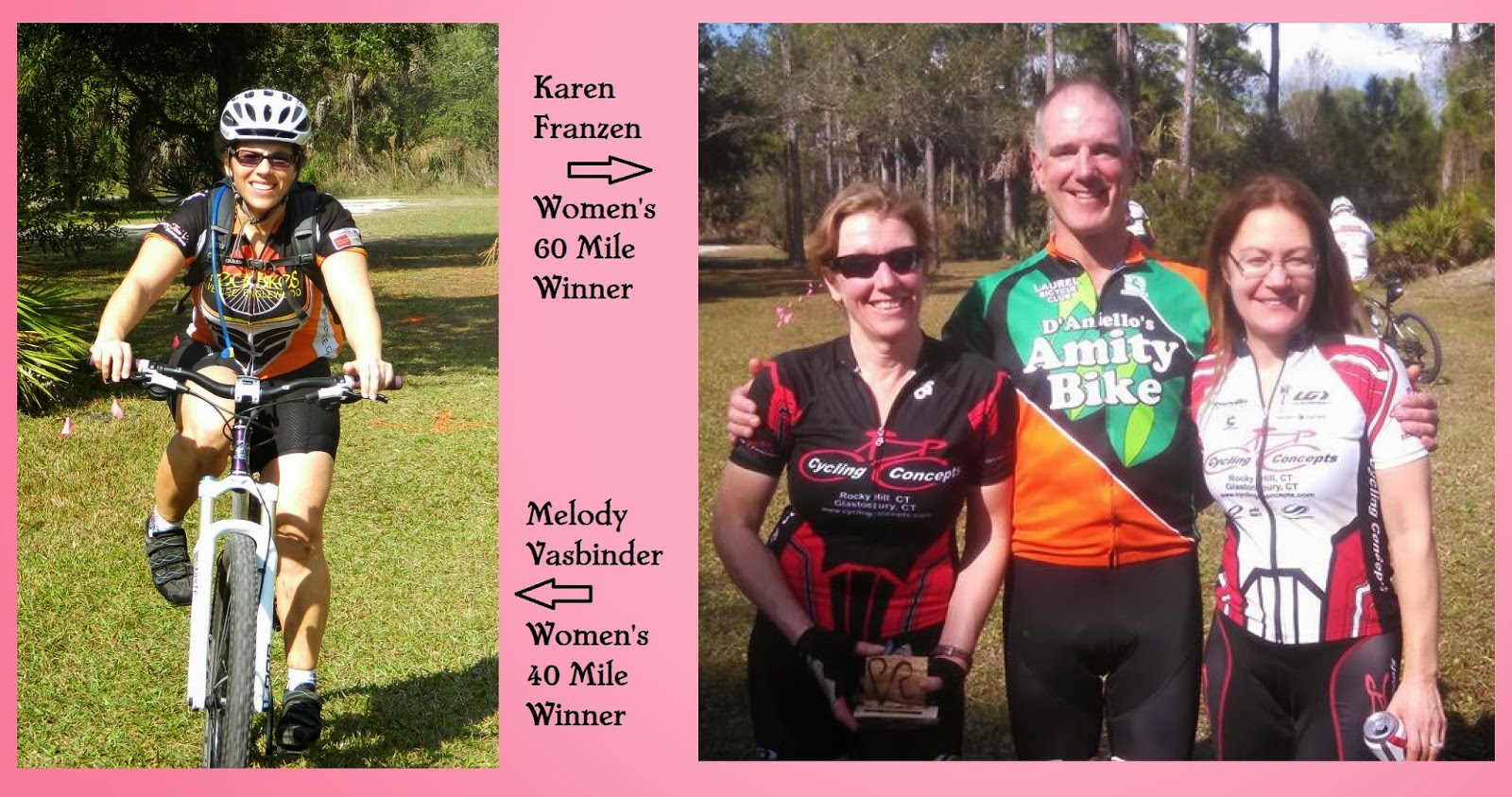 The rest of the journey for my 3 man group was filled with bumps and beautiful nature, smiles and sore muscles, cramps and craziness. For the next four hours we managed to stay together, through the tall grass, deep sand, over fences, across dams and eventually back to the pavillion. Due to the chaos at the beginning of the ride, which cost me about about 30 minutes, it took us roughly 6 hours to complete the 55 mile course. About 20 minutes later four members of Team RND Racing, having overcome their earlier flat, braved the beast and finished their journey.

It wasn't until I returned that I heard about the big win of the day. It came from the same team that has been dominating Piggy's for the past few years - Cycle Logic. A father/son duo named Scott and Justin Pfaff of Gainesville took the win with Kevin Greten of Sanibel coming in third. They managed to finish the pig epic in under 4 hours while leaving some serious gravel racers in their wake. It was an astonishing performance!

Finishing a race like Piggy's Revenge is a reward in itself. Rough on the body and hard on the mind, Piggy's tested our limits and pushed us to exceed them. I'll be attending many more races this year but in terms of sheer ruggedness this one will be hard to beat. And of course, nothing can beat the bratwurst and pig cookies.

Photos and videos of the event can be found on the SCORR Facebook page.

February 07, 2013
Schwalbe has an excellent reputation for putting out stellar, high quality MTB tires. The up side has been their grip and superior compounds, the down side has been their prices, that is until now. The New Rapid Rob follows a long tradition of tires named with the alliterative double R, like Racing Ralph and Rocket Ron. Not a bad tradition to be a part of. So, what is different with the Rapid Rob that we haven't seen before? I bought a pair of 26 by 2.10 and put them on my bike to find out.

February 25, 2015
I've always been a sucker for cheap tires. In part because I'm a starving artist but also because riders tend to pay too much when it comes to upgrading their bikes. For example: How often have you seen a recreational rider purchase top of the line tires because they save him a few grams in weight? In most cases, if you really want to cut a few grams put down the cheeseburger.
When it comes to mountain bike tires my measurement of quality sits at the apex between cost and consistency. For this reason I'm a huge fan of Schwalbe's Rapid Rob tires (Read that review here). While I'm still running a Rapid Rob on the front of my bike, I decided to try something new on the rear. Something even cheaper. Introducing the CST Patrol.

For about $26. the 26" by 2.25" version of the CST Patrol is uber cheap. You get a wire bead, a weight of 780 grams with a single rubber compound but no EPS (Exceptional Puncture Safety) which can be found on other versions of the tire…
Post a Comment
Read more

May 01, 2015
I have only ever tested a handful of 29ers. I generally found them to be more stable, aggressive on technical downhills with laid out geometry that felt race focused. While that sense of balance and control left a positive impression, I have never been able to afford such a beast. However, I will get to race one. Bicycles International of Venice and Luksha Reconstruction noticed my recent boost in name recognition, mostly due to the popularity of my book Twisted Trails. Then I told them about my ambitious racing schedule so they decided to sponsor me for the 2015 season. What I needed most was a bike good enough for cross country racing and gravel grinders. It didn't have to be a world beater but it had to stand a step above my now beat up Trek Four Series. Admittedly, that would be an easy task.
"What kind of bikes do you see at the races?" asked Jason Luksha, owner of Luksha Reconstruction. While the trends have been fluctuating over the years between 26, 27.5 and 29,…
Post a Comment
Read more